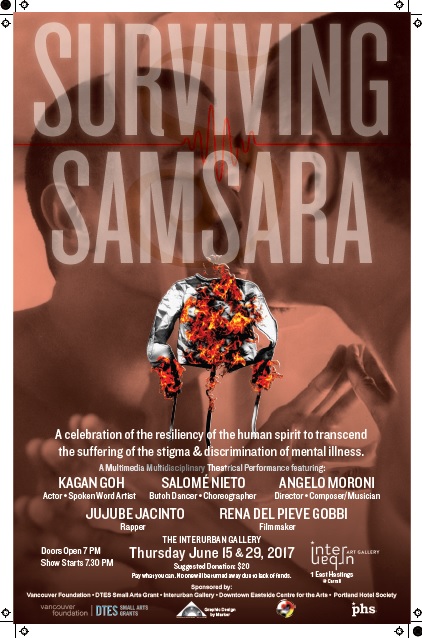 Suggested Donation $20
(Pay what you can. No one will be turned away due to lack of funds)

Surviving Samsara is a multimedia multidisciplinary live theatrical production that incorporates acting, spoken word, Butoh dance, rap, music, film and video. Surviving Samsara recounts the author Kagan Goh’s struggles with manic depression. This story takes place over two decades as Kagan Goh struggles to survive the highs of mania and the lows of depression. As a survivor, Kagan gives us insight into an ‘insider’s’ experience of madness. He exposes the damaging effects of the stigma of mental illness, and explores manic depression not only as a disorder, but as a spiritual emergence -- a vehicle for personal growth, healing and transcendence. Kagan’s deeply personal stories illustrate his transformation from victim to survivor to activist.

The production of Surviving Samsara is proposed, managed and facilitated by people with personal, lived experience with mental health challenges.

KAGAN GOH – Producer, Spoken Word Artist, Playwright, Actor.
Kagan Goh is an award-winning filmmaker, published author, spoken word poet, and mental health advocate and activist. Kagan has been published in numerous anthologies, periodicals and magazines. Select Books in Singapore published his first book, Who Let in the Sky? Goh is also an award-winning documentary filmmaker with a number of releases, including the award-winning Mind Fuck (1996) and Stolen Memories (2012). His films have been broadcast on national television and gained entry into respected film festivals across Canada. His personal mission is to educate people about mental health issues and fight the stigma against the mentally ill.
(www.kagangoh.com / www.stolenmemoriesdocumentary.com)

SALOMÉ NIETO – Butoh Dancer/Choreographer.
Renowned for her emotionally-charged performances, audiences have described pataSola co-founder, Salome Nieto, as ethereal, evocative and enchanting. Her work explores the essence of Butoh and the integration of spirituality with her cultural identity. An accomplished dancer and choreographer, Salome has 23 years of specialized Butoh training with internationally-renowned instructors and has danced extensively with Kokoro Dance Company. As well as executing her own works in Vancouver, BC, Salome has performed in Argentina, Mexico, Nicaragua, Thailand, England and Poland. Recent collaborations include projects with Butoh Masters Gustavo Collini-Sartor (Argentina) and Valentin Tzin (Russia), Dianne Farnsworth, Donna Redlick Dance and since 2014 with Poet Kagan Goh (Canada).
(www.patasoladance.com)

ANGELO MORONI – Director, Musician/Composer, Social Theatre Facilitator
With more than 15 years practicing Theatre and Music, Angelo has performed in numerous theatre and modern dance companies, including in experimental music ensembles. Furthermore, he has given social theatre workshops to kids, teens, adults, the visually impaired, Amnesty International, and to educators at UBC in Canada and Mexico. In Surviving Samsara, Angelo, the musician/composer, has also given Kagan Goh (actor) directorial support with his written pieces.

JUJUBE JACINTO – Rapper, Stage Manager, Audio Visual Designer
Jujube Jacinto is a self-taught lyricist, performer, and visual artist living with bipolar. Through her work, she heals personal trauma, inspiring others to do the same. As stage manager in Surviving Samsara, she assists with all technical aspects of the production: successful timing and delivery, costumes, props, projector, and lighting.

RENA DEL PIEVE GOBBI – Filmmaker, Production Assistant, Audio Visual Designer
Rena Del Pieve Gobbi is a Vancouver Artist and Filmmaker. Her work has screened in 15 countries and opened for the Images Film Festival Gala in Toronto as well as the Canadian Images Gala at the VIFF IN Vancouver. Rena was diagnosed with bipolar disorder in 1993. Her art work is concerned with issues surrounding PTSD and sexual violence. Rena collaborated with Kagan Goh on the Surviving Samsara piece photographically five years ago. She is very excited to continue collaborating on this material. "My feeling is that work that demonstrates the experiences of mental illness are crucial to raising awareness." To this end Rena has made a video, seclusion, out of photographs shot on a camera smuggled into a psychiatric hospital when she was in her early 20s and a painting depicting herself locked in the seclusion room for seven days. The video is narrated with three journal entries woven together from the same time. An improvisational soundtrack accompanies the narrative and brings to life the hallucinated monkey in the next room. (www.rena.ca)

NOTICE:
Copies of Kagan Goh’s chapbook of
SURVIVING SAMSARA are available for sale for $20.